Dead or Alive (band) Wiki
Register
Don't have an account?
Sign In
Advertisement
in: Singles, Epic Records, 1990s,
and 2 more

"Unhappy Birthday" is the last single from Fan the Flame (Part 1), the fifth studio album from the dance music band Dead or Alive (band). Released by Epic Records only in Japan in 1991.

A new version of this song was made for the 1995 "Nukleopatra" album, and is available only in the Japanese and South African edition of the album. In the North American edition of the album the "Ninja Billy Mix" is included, but under the name "12" Remix ". Also in the new edition of" Fan the Flame (Part 1) "inside the compilation box" Sophisticated Boom Box MMXVI ", this version changes its name as" Heavy Metal Version ". 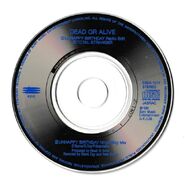